*Note that true widths are uncertain.  Initial interpretation by the Company is that the copper mineralization is hosted in steeply dipping zones of mineralization implying true widths in the range of 70% to 95% of reported intervals.  See full intercepts in Table 2.

“I am extremely encouraged by these results; they confirm the anticipated continuity of significant copper mineralization down dip at depths below 300m. This mineralization is open in multiple zones along strike and to depth. The consistency of copper grades over significant widths with higher, plus 1% copper grade intervals now being encountered is very encouraging as we eagerly await assay results from holes AP037 and AP038 which are located 500 metres to the west of the Alpine Stellar zone.

Tasmania is one of the best jurisdictions in the world to have a mineral discovery – governmental support, abundance of cheap power, proximity to industrial ports and a highly skilled local workforce in an active mining district that is host to more than five  operating gold and base metal mines sets it apart from most global copper producing locations.

With receipt of these encouraging results the Company has decided to initiate preliminary resource studies to determine the various possible scenarios for extraction in order to help guide future drilling.” 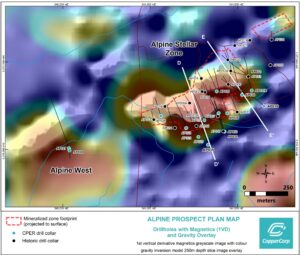 The Company’s maiden drill program at Alpine has focused on infill and extension drilling with a focus to vector towards zones of thicker and higher-grade mineralization at the Alpine Stellar zone, and step-out drilling to test the high-priority target at the Alpine West zone.  A total of 17 holes have been completed to date.  The results of 13 CopperCorp drill holes (AP022 to AP034) and 21 historical drill holes (AP001 to AP021) from the Alpine Stellar zone have been previously reported, with best significant intercepts from these and newly reported results (this release) including:

Interpretation of the project geology to date suggests that the best high-grade copper zones at the Alpine Stellar zone are associated with chalcopyrite mineralization in structurally controlled breccia zones overprinting magnetite-hematite-pyrite ironstone units and in brittle fracture vein and breccia networks overprinting intensely silica-albite altered metasediment host rock. The Company has commenced a geological review towards refining the Alpine geological model with a particular focus on the high-grade zones that will form the basis for targeting the next round of drilling at Alpine.

The Company has commenced a geological review towards refining the Alpine geological model with a particular focus on the high-grade zones that will form the basis for targeting the next round of drilling at Alpine that will aim to prove up the continuity and down dip extension of high-grade copper zones.  Drilling is anticipated to recommence in Q2 2023 following drill hole planning and permitting.  The Company will also commence preliminary metallurgical studies for Alpine.

In addition to the ongoing drilling and geological review work at Alpine, the Company has commenced field reconnaissance sampling at priority regional exploration target areas within the AMC project (Figure 11) and is in the process of permitting a maiden drill campaign at the Dora prospect within the Skyline Project5,7 planned for Q1 2023 subject to availability of drill rigs. 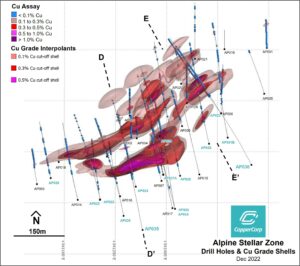 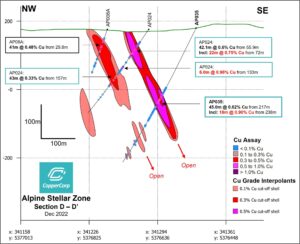 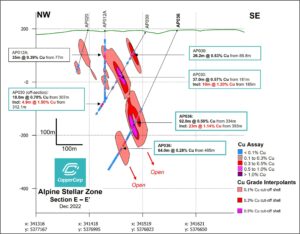 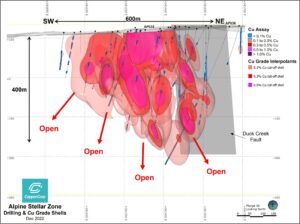 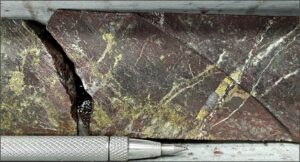 About the Alpine Prospect

The Alpine prospect was discovered by CRA Exploration in the early 1980’s after following up an airborne magnetic survey with gridding, ground magnetics, and soil geochemistry followed by two diamond drill holes in 1985. Stellar Resources drilled a further 19 holes between 2006 and 2008. The historical, wide-spaced drilling intersected significant IOCG-style copper mineralization, with significant intercepts including:

Mineralization at Alpine is hosted in intensely deformed and metamorphosed amphibolites, mafic and pelitic schists, graphitic phyllites and carbonates belonging to the Bowry Formation of the Arthur Metamorphic Complex.  Copper mineralization is associated with up to three sub-parallel magnetite-hematite-siderite-sulphide lenses in strongly silica-siderite altered chlorite schists. Mineralization consists mainly of chalcopyrite with lesser covellite and bornite. Additional chalcopyrite-pyrite breccia, vein and disseminated mineralization is hosted in silica-siderite altered and veined quartzites and schists adjacent to the ironstone lenses.  Anomalous levels of cobalt is associated with the copper mineralization, typically averaging 200 to 300ppm Co and locally reaching up to 0.1% Co over short intervals.

The mineralization strikes east-northeast and dips steeply to the southeast, forming an interpreted fault-bound boudinage within the highly deformed schists of over 600m in strike length. The deposit remains open down dip and along strike to the west.

About the AMC Project

The AMC Project covers a total of 1,066 km2 along approximately 100km of strike length and establishes CopperCorp as the dominant owner of prospective ground in the district. The rocks are Neoproterozoic-Cambrian age and comprise a regional-scale metamorphic structural deformation zone that is host to widespread magnetite-sulphide-silicate alteration and mineralization indicative of a large Iron Oxide Copper Gold (IOCG)-style system and includes the Savage River 498 Mt @ 46% DTR magnetite mine (owned by Grange Resources Limited)8 and CopperCorp’s Alpine copper prospect.

The Alpine prospect is located 30 km northwest of the local mining hub of Zeehan and within 5 km of two large-scale operating wind and hydro-electric renewable energy plants. 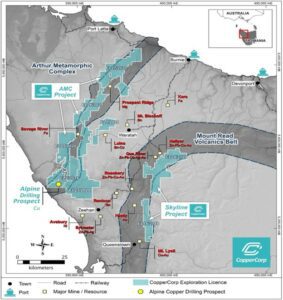 Full information on historical exploration activities and results at the Alpine Prospect and AMC Project are included in the Company’s Technical Report with an effective date of 18 April 20211.

CopperCorp’s diamond core drill holes are drilled at HQ and NQ core diameters using triple tube to maximize recovery. Core recovery is generally good in mineralized zones (95-100%) with poorer recoveries associated with brittle faulting on zone margins. Sample collection is supervised by CopperCorp geological staff. Mineralized zones are marked up for sampling by an experienced geologist.  Half core is split by diamond saw on nominal 1.0m sample lengths while respecting geological contacts. Samples are bagged and ticketed prior to delivery by Company personnel to the ALS commercial laboratories in Burnie, Tasmania, for sample preparation. The half core samples are crushed to 80% passing 2mm, riffle split to 500g and then pulverized to pass 75um. Coarse duplicate sampling is conducted every 20 samples to assess variability of the coarse crush. Cu and multi-element assay is by 4-acid digest followed by ICP-MS at ALS laboratories by method ME-ICP61a. Au assay is by 30g fire assay at ALS laboratories by method Au-AA25. Certified reference materials (CRMs), blank and duplicate QAQC samples are included in sample submissions at 20 sample intervals. All QAQC samples were within acceptable limits (2 standard deviations for CRMs, duplicates <5%).

Reported significant mineralized intervals in this news release (including for new and historical drillhole intervals) are calculated as down-hole length-weighted intercepts using a 0.1% Cu lower cut-off grade and generally carry a maximum internal dilution of 4m. The calculated intervals for historical drill holes reported in this news release may vary from previously reported interval calculations that used a cut-off grade of 0.3% Cu.  The 0.1% Cu cut-off grade is considered to appropriately define the boundaries of copper mineralized zones at the Alpine prospect and provides for balanced reporting of drilling results during the exploration stage, enabling reporting of both low- and high-grade intercepts. No top-cut grade was applied. True widths of drill hole intercepts are yet to be determined; however, it is estimated that true widths are in the range of 70% to 95% of reported intervals.

Additional information about CopperCorp can be found on its website: www.coppercorpinc.com and at www.sedar.com.

CAUTIONARY STATEMENT REGARDING FORWARD-LOOKING INFORMATION: This news release includes certain “forward-looking statements” under applicable Canadian securities legislation relating to drilling results, planned drilling, drilling and exploration programs, the interpretation of drilling results, the merits and potential of the Alpine West prospect and the Stellar zone, mineralization and the potential to expand the mineralization, the definition of higher grade mineralization zones, plans for future exploration and drilling and the timing of same, the use of 3D models to plan future drilling, the receipt of assay results and reporting of same, a maiden drill campaign at the Dora prospect within the Skyline Project, the merits of the Company’s mineral projects, funding of drilling programs and other plans of the Company. Forward-looking statements are statements that are not historical facts; they are generally, but not always, identified by the words “expects”, “plans”, “anticipates”, “believes”, “interpret”, “intends”, “estimates”, “projects”, “aims”, “suggests”, “often”, “target”, “future”, “likely”, “pending”, “potential”, “goal”, “objective”, “prospective”, “possibly”, “preliminary” and similar expressions, or that events or conditions “will”, “would”, “may”, “can”, “could” or “should” occur, or other statements, which, by their nature, refer to future events. The Company cautions that forward-looking statements are based on the beliefs, estimates and opinions of the Company’s management on the date the statements are made, and that such statements are subject to risks and uncertainties that may cause actual results, performance or developments to differ materially from those contained in the statements. Consequently, there can be no assurances that such statements will prove to be accurate and actual results and future events could differ materially from those anticipated in such statements. Accordingly, readers should not place undue reliance on forward-looking statements.

Factors that could cause future results to differ materially from those anticipated in forward-looking statements include risks associated with exploration and drilling; the timing and content of upcoming work programs; geological interpretations based on drilling that may change with more detailed information; possible accidents; the possibility that the Company may not be able to secure permitting and other governmental approvals necessary to carry out the Company’s plans; the risk that the Company will not be able to raise sufficient funds to carry out its business plans; the possibility that future exploration results will not be consistent with the Company’s expectations; increases in costs; environmental compliance and changes in environmental and other local legislation and regulation; interest rate and exchange rate fluctuations; changes in economic and political conditions; and other risks involved in the mineral exploration industry. The reader is urged to refer to the Company’s Management’s discussion and Analysis, publicly available through the Canadian Securities Administrators’ System for Electronic Document Analysis and Retrieval (SEDAR) at www.sedar.com for a more complete discussion of risk factors and their potential effects.

Forward-looking statements are based on a number of assumptions, including management’s assumptions about the following: the availability of financing for the Company’s exploration activities; operating and exploration costs; the Company’s ability to attract and retain skilled staff; timing of the receipt of necessary regulatory and governmental approvals; market competition; and general business and economic conditions. The Company disclaims any intention or obligation to update or revise any forward-looking statements, whether as a result of new information, future events or otherwise, except as required by law.

Menu
This website uses cookies to improve your experience. If you continue to use this site, you agree with it.
Ok